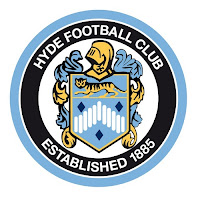 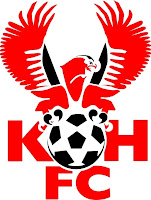 2012/13: 2nd in Conference – “Just missed out!”
Kidderminster Harriers
This season we are looking to go one better and the majority of last season’s squad has remained unchanged with a few exceptions like Pilkington going to Hereford and Vincent going up to Scotland to join Inverness but to replace those we have brought the likes of Lee Fowler and Dior Angus in to name a few to Help strengthen the overall squad.
Steve Burr is one of the best managers that we could find for the Harriers. His knowledge of unknown players is exceptional and he works very hard to get the best out of them, which can be shown with Chey Dunkley who was fairly unknown and is know one of the league’s top defenders. Burr knows if the players work hard then we can achieve big things this season.
Aggborough is a nice ground for this league and holds just over 6000 fans. It has great food here so make sure when you come to Aggborough this season you check out the £4 pies – they are well worth the money!
Fixtures
There are quite a few games to look forward to the season. Top of my list has to be Wrexham as that is always a cracking day out, as well as the other big teams (like Luton, Grimsby and Forest Green). I am also looking forward to the games against the new members especially Chester and Barnet – and look forward to a trip to The Hive later on in the season.
Predictions
To get promoted: Kidderminster (Champions) and Wrexham (Play-offs)
To get relegated: Salisbury, Halifax, Woking and Welling
Kidderminster’s finish: 1st
Liam
@LiamKHFC

2012/13: 16th in Conference – “stressful, worrying, frustrating”
Lincoln City
We lost our two best strikers in the summer: Jamie Taylor who scored 16 goals last season left us for Sutton United for family reasons, and Vadaine Oliver who scored 13 goals last season was snapped up by League One Crewe. I feel that our gaffer has done a great job of replacing them by signing four strikers. The two who I am most impressed are Waide Fairhurst (who scored 13 for Macclesfield last season) and Nick Wright who was part of Mansfield’s promotion winning side and has had previous impressive goal scoring records at Conference level with Tamworth and Kidderminster. I am pleased Alan Power, Jake Sheridan and Tom Miller signed new contracts in the summer as they were key for us last season.
I believe Gary Simpson is right for the job as he has a passion and love for the Imps having been our assistant manager to Keith Alexander, and has unfinished business having seen us come close to promotion in League Two. Since being appointed manager back in February he saved us from relegation from the Conference on the final day of the season and masterminded an impressive set of results together. He clearly has a good eye for players in the transfer market, although it may be beyond him to get us promoted in his first season in charge.
We play at Sincil Bank, an all-seater stadium with a capacity of 10,120. This coming season there is a change to where the away fans are being housed – moving from the corner of our biggest stand (the co-op) to our smallest one on the opposite corner which was previously our family stand. The Stacey West stand behind the goal is being closed for this season to cut costs but will be open if necessary for larger away followings to sit in. The whole of the co-op stand is being given to home fans this season – the way it should be in my opinion as it is our biggest stand. The cathedral can be seen from the upper sections of the stadium. We have a bar at the ground which welcomes away fans and shows any live football; there is also a Wetherspoons which is always popular on match days, as well as a selection of bars in the town centre.
Fixtures
I am most looking forward to playing our fierce local rivals Grimsby as since dropping to the Conference, we are yet to beat them. Also looking forward to Alfreton away again this season as it is a short trip, which we have very little of in this league.
Predictions
To get promoted: Luton (Champions) and Forest Green Rovers (Play-offs)
To get relegated: Braintree, Alfreton, Hyde and Salisbury
Lincoln’s finish: 7th
Karl
@Lincoln_Karl 2012/13: 7th in Conference – “Paul bucked up!”
Luton Town
Most people will say Stuart Fleetwood is the biggest loss; however, I don't agree. There’s no doubt he can score goals, but his attitude was terrible. The signing of Luke Guttridge being the pick of the bunch, I also expect Mark Cullen to do a job up front!
John Still is now in charge and I'm hoping he's finally the right man to lead us back to the Football League! As expected he’s cleared out a few of the players, but to date has made eight signings.
If you've never been to Kenilworth Road then this is the season to come and visit us. As away fans you almost go through people's gardens to get to the stand but don't let that put you off! The atmosphere inside the ground is fantastic and expect 5-6000 home fans every home game!
Fixtures
I'm personally looking forward to seeing Barnet’s new ground and Cambridge away is always good!
Predictions
To get promoted: Forest Green Rovers (Champions) and Cambridge (Play-offs)
To get relegated: Hyde, Dartford, Welling and Braintree
Luton’s finish: top five
Richard
@HabbyHatter 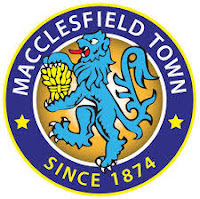 2012/13: 11th in Conference – “Interesting, but frustrating”
Macclesfield Town
Sam Wedgbury and Keiran Murtagh are the key midfield losses, but once again they were expected to go. Our Player of the Season Wedgbury gave everything, all the time. And always came across as someone who knew what the supporters expected of him and the team. Such was his effort, it was no surprise when a League club came calling for him. With Murtagh, he was always solid in the centre and Macclesfield were a lot different and underachieving whenever he wasn't playing in the squad. Unfortunately such was his tendency to get booked, Murtagh spent times on the sideline through suspension, and this certainly didn't help us. Matthew Barnes-Homer, our main goalscorer has not yet officially left, but most supporters expect him to. He's currently on trial at Notts County. Given the amount of goals he got for Macclesfield, it will be a key loss. But John Askey has signed Chris Holroyd, a Macclesfield born lad who scored nine goals for us during a short loan period last season. This included a hat-trick against Stockport County at Edgeley Park, which is certainly a good way of endearing yourself to the Macclesfield supporters! I'm also delighted that keeper Rhys Taylor has signed a new contract, and that Jack Mackreth has committed – a young, pacy winger who has great potential to make it in the higher leagues.
John Askey knows Macclesfield Town in and out, and what the supporters want to see at the Moss Rose and away. And that he would most likely commit to the same style of play that his predecessor used. Having been in charge of Macclesfield's youth output, I'm sure a few young prospects will make their way into the squad as the season goes on. Not only that, his new assistant is Efe Sodje, another Macclesfield legend who will bring in his in depth knowledge and status to ensure the squad has passion before the game begins. For a coaching team that have nearly 800 appearances in a Macclesfield shirt between them, they already have the respect from the supporters; they need it from the players though. I just get the feeling they didn't have it last season.
Moss Rose is a very quaint, standard League Two/Conference ground, that combines the modern stands with the old quite well. I suppose it's nicely old fashioned in the sense that it still has a terrace without a roof – away fans be warned if you're playing us in the winter!
Fixtures
Wrexham and Chester are the stand-out games – it's good that after one local rival departs (Stockport County) another can take their place. A bit more local for myself though, based in Staffordshire, is the trip to Tamworth and I went there for the first time last season on a Tuesday night. A dour goalless draw, but I enjoyed good conversation with some of their supporters beforehand, inside a typical lower capacity Conference ground. It was what I would call a proper Conference away game. I look forward to Kidderminster Harriers again this season as well, for the same reason about supporter interaction.
Predictions
To get promoted: Kidderminster (Champions) and Luton (Play-offs)
To get relegated: Southport, Salisbury, Tamworth and Gateshead
Macclesfield’s finish: 11th again
Ian
@Ianthenoodle 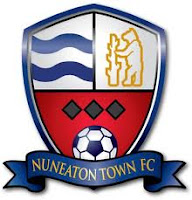 2012/13: 15th in Conference – “Incredible last third”
Nuneaton Town
We have signed Louis Moult permanently who we had on loan at back end of last season and formed a great partnership with Andy Brown. Browny himself scored 20 goals last year in a ‘bottom four’ side which is remarkable. We've also just signed Greg Pearson who is a proven conference goal scorer so attacking wise we look good – we just haven't got a goalkeeper yet!
Our boss Kevin Wilkins is absolutely the right man. He stuck with us through demotion and delivered three promotions in four years, as well as Conference survival last season. He was also a brilliant goal scorer for us in the late 90s.
Our ground is adequate and is quite similar to others in the league. With metal terraces either end – one of which holds 1100 for away fans. The Main Stand holds around 400 fans but is located towards the away end.
Fixtures
Look forward to playing any of the big ex Football League teams. Luton away in front of 6200 last year showed how far we had come in four years when we had Dunstable and Marlow as league games! Aldershot will be good as we've never played there and Macclesfield first game when it's warm (rather than a freezing cold December fixture)!
Predictions
To get promoted: Luton (Champions) and Wrexham (Play-offs)
To get relegated: Hyde, Alfreton, Aldershot and Gateshead
Nuneaton’s finish: 17th
Mark
@markjakeman
Posted by Lucy at 6:56 pm