In case you missed it, I was asked to write a piece in Saturday’s commemorative programme, on Underhill memories. I didn’t want to list a number of memories, because I wanted to try and make it a decent read (as opposed to ‘this date we played this team and this happened’) so here’s my recollection of thoughts as a Bee for 19 years. Hope you enjoy reading it as much as I did writing it. 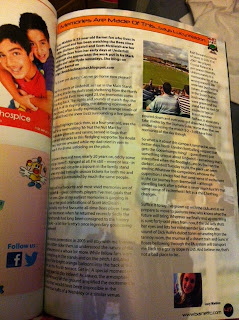 “Is it over yet daddy? Can we go home now please?”
My first words at Underhill, as I sat in the Main Stand, nestling inside my dad’s coat, sheltering from the North London cold. Even now, aged 23, the memories come flooding back. The sights and sounds of match day: the pitch in all its sloping glory, the differing opinions of the crowd, often loudly expressed, the strange smells of football food, the sheer buzz surrounding a live game.
The real highlight back then, as a four-year-old, was the half time treat: visiting ‘Mr Nut the Nut Man’ for chocolate peanuts and raisins, served in bags that seemed like sacks to this fledgling supporter. No doubt they kept me amused while my dad tried in vain to watch the drama unfolding on the pitch.
Between then and now, nearly 20 years on, oddly some things haven’t changed at all. I’m still – more or less - in the same seat (despite a sojourn in the family stand when my dad bought season tickets for both me and my brother), surrounded by much the same people.
Many of my favourite and most vivid memories are of Underhill – great contests, players I’ve met, goals that I’ve seen. One of my earliest memories is gasping in awe at the goal celebrations of Scott McGleish - probably my first favourite all-time Bees player. I was over the moon when he returned recently. Sadly the handstands had long been consigned to the history books – a bit like Scotty’s once legendary goalscoring prowess!
Of course promotion in 2005 will stay with me forever, I was a little older then, so understood the nature of the achievement a whole lot more. While fellow fans were celebrating in the stands and on the pitch, I dribbled one of the bright orange balloons into the back of the net on the North terrace. Get in!  A special moment on a very special day indeed! As always, the tight atmosphere and intimacy of the ground amplified the excitement in a way that would have been impossible in the cavernous halls of a Wembley or similar venue.
Fast forward a couple of years to July 21st 2007. We played Crystal Palace in a pre-season friendly. Unfortunately it is memorable for all the wrong reasons. We were late purchasing tickets, so ended up in the South Stand, back when the seats were green and the stand had no roof. Of course in typical British summer fashion, it absolutely poured down and everyone got drenched, forcing us to take shelter by the Durham Suite. Worse than that, we ended up losing the match 3-2 – I still have fond memories of the day though.
So what is it about this compact, ramshackle, seen-better-days North London footballing outpost that gets the goosebumps rising?  I guess there’s just something unique about Underhill – something that’s intensified when the floodlights are on. Even on the darkest, coldest Tuesday night, the place can seem electric. Whatever the competition, whoever the opposition, I always feel that same sense of excitement in the car journey from Brentwood – although travelling back after a defeat is never much fun! It’s that same sense of excitement I felt as a child. Nothing changes.
Suffice it to say I’ve grown up with the club, and as we prepare to move to pastures new, who knows what the future will bring. Wherever we finally end up one thing is sure; forty-odd years from now, if the old lady shuts her eyes and lets her mind wander just a little, the sound of the Dick’s dulcet tones emanating from the tannoy room, the murmur of a distant train and Guns ‘n’ Roses bellowing through the PA system will transport me back to a grassy slope in EN5. And believe me, that’s not a bad place to be...
Posted by Lucy at 9:22 pm