As many of you are aware, last season it was my job to write up the player biographies on the opposing teams visiting Underhill, for the matchday programme.
Although I received copy from other contributors, which in a lot of cases meant just sub-editing, there was also a lot of researching involved, particularly when information was out-of-date or incorrect.
I came across a number of former Bees while producing the copy, which brought back a lot of memories and was interesting to see how (in some cases, forgotten) players were getting on. I thought I’d include all of these in a ‘where are they now?’ two-part special.
I previously posted part one: My XI former Bees, so here is part two – or everyone else who didn’t make the cut, including a goalkeeper five-a-side.
Goalkeepers
JAKE COLE (Plymouth Argyle)
27-year-old keeper Jake joined the Pilgrims in August 2011 as a free agent and went on to play a huge part in helping the team retain their Football League status. On the books at QPR, he acted as understudy to other goalkeepers including Lee Camp, spending time on loan at various clubs including Hayes, AFC Wimbledon and Barnet. He eventually signed for the Bees on a permanent basis and in his first season was named ‘Player of the Year’; he went on to make over 100 appearances in two years. Following his release he joined Plymouth.
Where are they now? Out of contract, rumours suggest he’s off to join Walsall.
STEVE COLLIS (Rochdale)
Goalkeeper Steve arrived at Spotland towards the end of the January transfer window on non-contract terms. Now at 31, he started his career at Barnet and also had a spell with Nottingham Forest, but first played League football for promoted Yeovil in the 2003/04 campaign. After three seasons at Huish Park, Steve moved on to Southend and has since appeared for several other clubs, including Crewe, Torquay and Northampton.
Where are they now? Signed a one-year deal with Rochdale in May, to act as goalkeeping coach.
ROSS FLITNEY (Gillingham)
Ross began his career at Arsenal before joining Fulham as an apprentice. Released in 2005, he signed for Barnet where he made 58 appearances and will be remembered for that red card after 90 seconds at Old Trafford in League Cup. After two seasons, he dropped down to Non-League football playing for Grays and Croydon, before joining Dover Athletic. The 28-year old shot stopper then moved to Gillingham in 2011 on a two-year deal but knee injuries have kept him out of being first choice.
Where are they now? Released by Gillingham in January, he plays for Eastleigh in the Conference South.
MIKHAEL JAIMEZ-RUIZ (AFC Wimbledon)
The 28-year-old goalkeeper has a wealth of experience, both at club and international level. Venezuelan-born Mikhael played against the likes of Colombia, Brazil and Argentina. Mikhael began his career with Romanian side CFR Cluj. After an unsuccessful trial at Tottenham Hotspur, Mikhael spent time at Barnet, before earning his breakthrough in English football at Aldershot, where he helped the club into the Football League. A move back to his native Venezuela followed and he put in consistent performances for Premier League team Yaracuyanos. He then returned to England re-signing for Aldershot. Mikhael spent last season at Dover Athletic and joined the Dons in August
Where are they now? AFC Wimbledon but will discuss his future on return from holiday.
SAM WALKER (Bristol Rovers)
Young goalkeeper Sam joins Rovers on-loan from Chelsea. At 20 years old, Sam has already had a season and half of experience in League Two with loan spells at Barnet and Northampton. Last year he spent half of the campaign at League One Yeovil.
Where are they now? Returned to parent club Chelsea, after a spell with Colchester.
Defenders
Damian Batt (Oxford)
Where are they now? Free agent, following his release from Oxford.
Strikers
ADAM BIRCHALL (Gillingham)
Striker Adam joined a three-year deal on arrival at Priestfield in 2011, but a cruciate knee injury pre-season kept him out of last campaign. Joining from Dover, Adam was a great success, scoring 63 goals in 93 appearances in all competitions. Starting out at Arsenal, but never making the first team, the 27-year old also had spells with Mansfield and Barnet.
Where are they now? Gillingham.
Posted by Lucy at 4:46 pm No comments:

As many of you are aware, last season it was my job to write up the player biographies on the opposing teams visiting Underhill, for the matchday programme.
Although I received copy from other contributors, which in a lot of cases meant just sub-editing, there was also a lot of researching involved, particularly when information was out-of-date or incorrect.
I came across a number of former Bees while producing the copy, which brought back a lot of memories and was interesting to see how (in some cases, forgotten) players were getting on. I thought I’d include all of these in a ‘where are they now?’ two-part special.
A little bit difficult to compile, particularly considering the numbers (i.e. six goal keepers and three midfielders), part one includes my XI Former Bees. Part two will be in the next couple of days and will include everyone else. 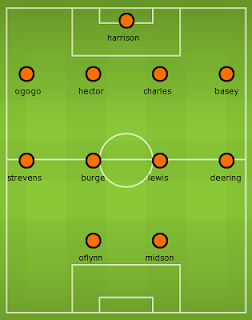 Player of the Season
1) David Stephens
Absolutely solid and in my opinion, didn’t really put a foot wrong in his debut season with the Bees. A consistent defender who kept us in so many games with his last-ditch tackles and no-nonsense style of defending, David’s quality performances in so many games were the reason why it wasn’t settled weeks before the end of the campaign. I think he’s one of the best defenders we’ve had for years – and he’s only 21!
2) Graham Stack
16 clean sheets. Unbeaten at home in eight matches with only one goal conceded.
3) Jake Hyde
14 goals for the season. His goals won us 18 points.


Young Player of the Season
1) Elliot Johnson
Making his debut in November in the 1-0 win against Torquay, the young defender went on to make 25 more appearances, becoming ever-present in the left back position. A worthy winner, Elliot only signed a professional deal in May, having previously been named as an unused substitute. His debut was fairly outstanding, the occasion didn’t faze him and he looked so comfortable on the ball, always keen to get forward. Since then, he’s grown in confidence and hasn’t looked back. I’m surprised he wasn’t handed his first start earlier, considering our previous left backs were Edgar and Brown. I imagine he will be a big player for us next season!
18 years old. 26 league appearances, 1 goal.
2) David Stephens
21 years old. 42 league appearances, 1 goal.
3) Andy Yiadom
21 years old. 39 league appearances, 3 goals.


Most improved player
I couldn’t pinpoint one single player, so my top three are in alphabetical order:
·         Mark Byrne
In my opinion, Byrner has improved since the start of the season. He’s copped his fair share of stick, which has largely been undeserved. He is sometimes a little inconsistent but there’s no doubt that Byrner is a class player and deserves to be playing at a higher level. It may have been a tough ask to be asked to play alongside the likes of Edgar Davids and John Oster but he thrived on the opportunity and his performances definitely improved. He’s one of my favourite players and he’s come a long way from the player he was when he returned from injury when initially on loan. Back to his best, I’m praying we manage to hold on to him.
·         Barry Fuller
The beginning of the season was one to forget for everyone, none more than Baz. Giving away a number of needless penalties, looking nervy on the ball and not making the right decision. It would be wrong to pinpoint one defender, when as a unit, we looked horrendous at the back, but a lot of the blame was on Baz’s shoulders. He definitely improved towards the end of the season with a number of quality performances (that also saw him win the Man of the Match award), it’s a shame it all ended with a needless red card after the final whistle v Dagenham & Redbridge.
·         Jake Hyde
I may be biased because he is my favourite current Barnet player and I rated him from his first spell with the club, but Jakey has come a long way since then! Back in 2009, he was only 19 and making his Football League debut (having previously played for Weymouth while on the books of Swindon Town). Six goals in 34 appearances may not have looked a good return, but we had John O’Flynn up front who got the bulk of the goals, while the midfield also chipped in. Returning at the age of 22, Jake netted over twice as many goals this time round, playing largely as the lone striker and often with little service. He absolutely works his socks off and you can’t fault his effort at all.


Goal of the Season
I’ve been trying to find video clips of each of these, but that’s proved unsuccessful, but here’s three you won’t forget:
1) Ricky Holmes v Southend (October 6th 2012)
I remember rushing home from town to listen to this match on BBC Essex and even Southend’s commentary team said this was a contender for goal of the season! As soon as I saw it later that evening, I wanted to watch it over and over – a stunning goal! It’s a shame we went on to draw, because that was a strike worthy of winning any game!
2) Ross Jenkins v Accrington Stanley (March 19th 2013)
Overhead kick. Say no more.
3) Luke Gambin v Morecambe (March 9th 2013)
Not a bad feat scoring on your first full start. Lovely assist by Dani Lopez.
Posted by Lucy at 12:02 pm No comments:

Long overdue, I’ve been meaning to upload a few of my photos (I took over 50!) of the final game at Underhill, against Wycombe.