First in this season’s Two minutes with... is Lincoln City’s visit to The Hive. I think this campaign may be prove difficult, as one man and his dog aren’t always available on Twitter. In this instalment, Imps fan Karl (@Lincoln_Karl) gives his thoughts. 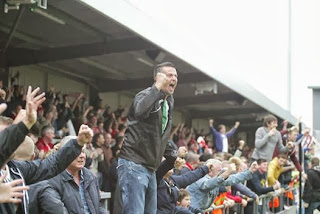 Saturday 14th September 2013
Barnet (3rd) v Lincoln City (8th)
Previous weekend:
FC Halifax Town 2-1Barnet
Lincoln City 0-1Salisbury City
Pre-match
How did you get to the game?
I came by minibus with 13 others. It took about 45 minutes longer due to the beer flowing – meaning a number of comfort breaks at service stations!
What did you make of The Hive?
I thought the biggest main stand looks quite decent and stood out, but the rest looked average in comparison considering it's a new ground. I thought the away terrace steps were a bit dangerous as I nearly slipped when we went crazy when we equalised, so future away fans watch out!
If you went to Underhill, how did The Hive compare?
I think The Hive is more attractive than Underhill, although the location isn't ideal as there are no pubs or restaurants right near the ground. I used to find The Old Red Lion ideal, a minute away from the away end at Underhill.
Match
What did you make of the game?
At the start of play I would have been happy with a point, so I was happy we got one. Given how much possession and pressure we put on in the first half I was disappointed when we went a goal down, although to be fair Barnet had the best of the second half.
Who (from either side) impressed you?
Alan Power was outstanding for us, was good to have him back after his three match suspension, and Marsh-Brown for the Bees was decent – scoring a good solo goal.
Who (from either side) could have done better?
Acheampong for Barnet could have done better in defence, looked a bit shaky, especially first half.
Post-match
Was the score line a fair reflection on the game?
We had the better of the first half, and Barnet had the better of the second. A draw was probably a fair result.
Who do you play next and how do you think you’ll do?
We have Hyde at home this Saturday and I am sure they will make it difficult for us. We have won four games out of five at home so we should add another win at fortress Sincil Bank! I predict a 2-0 win for us.
Ratings
Price of match day ticket
£16 to watch a game down south in a new ground was a good price – 8/10
Purchases made at the ground
I had a few beers in the away bar before kick-off which tasted a bit weak. The bar staff seemed miserable and didn't seem to know how much to charge, despite a price list displayed on the wall – 6/10
View
Decent view from where the 576 Lincoln fans were in full voice all game and stayed behind singing and bouncing 20 minutes after full time – 9/10
Quality of football
It wasn't the greatest game ever but I have seen worse – 7/10
Overall experience
Because of our equaliser at the death which we deserved – 8/10
Total = 38/50

If you’ve been to The Hive this season, give me a shout and you can be your club’s voice. Additionally, if you know you’re heading down for your game, let me know. If you’re not a Conference fan, but are ground-hopping, you can also give your opinion – I can be found on Twitter @Luuuce_x
Posted by Lucy at 9:10 pm No comments: