My trip to Parc des Princes

I’ve really struggled with this post as I don’t really have much to say. But when I went to Paris last month for a few days, I took a trip to Parc des Princes, home to Paris Saint-Germain and watched them play Nice in Ligue1.
It had been a while since I’d been to a game with a crowd bigger than 3,000 and it was the first I’d been to in France (although I’ve been to a couple in Spain).
The Metro was certainly an experience – and not a good one. I imagine it was a lot worse than travelling across London on the tube – swarms of people who were generally rude, but nothing in comparison to what followed. The number of police around the stadium and neighbouring streets was astounding – roads blocked off by row of police armed with shields and other weapons. I’m only used to a handful of inept stewards, so it was certainly an experience. This was a lot worse when we left the ground after the game, too. 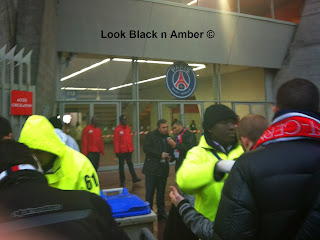 For the second time ever, I was searched before entering the stadium. After queuing for ages (I was the only female for miles around!) I was ushered straight through. In fact, there were probably no more than five women in the area we sat, I really thought there’d be more. 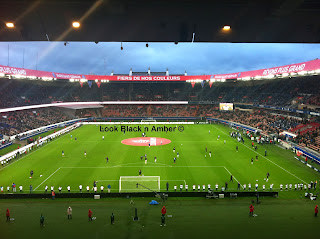 The one thing that fascinated me the most was the chanting from the PSG fans and how many of those chants I was familiar with – ones that had been translated, or tunes that had been adapted. I must admit I did feel a bit special when someone started the ‘give me a...’ chant and I could join in because I know the French alphabet. For those asking: pé – a – erre – i – esse. When the teams came out, thje fans responded to the man on the tannoy by shouting out the players’ surnames, something that is also done at home; funny how the simple things amused me most. 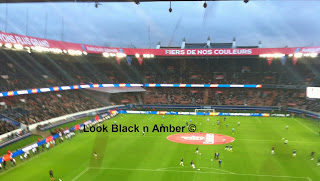 The crowd were much more intimidating than I was expecting, booing every time a Nice player had the ball, or when their players’ names were called out and on the big screens dotted around. The away section at Parc des Princes is pretty amazing though – the fans are sheltered by Perspex to stop any potential missiles. The only thing I saw thrown was paper, as each seat had a card to hold up before the game – not that anyone did and the majority were turned into paper aeroplanes or confetti. It was also funny seeing how angry the people around us got, while I stood in silence, laughing at them. Although I didn’t understand word-for-word, their abusive tirades, it doesn’t take a genius to work out the chanting of ‘jaune’ and ‘rouge’ when a few rash challenges flew in.
PSG won 3-1, with a hat-trick from Ibrahimovich. Now I’m firmly in the ‘dislike’ camp when it comes to the Swedish striker and despite his goals, he wasn’t that much of a threat. I don’t follow French football at all, so had no idea about the Nice side, but they were dreadful – it was like Barnet trying to play Barcelona! The football played wasn’t all that great, either. There were far too many players bunched up in the middle of the pitch and nobody seemed keen to get wide, and when plan a didn’t work, plan b was to hoof it. I’m not sure what I was expecting, but I wasn’t wowed at all – and it was freezing! Definitely not blazer and pumps weather!
Give me Non-League any day! 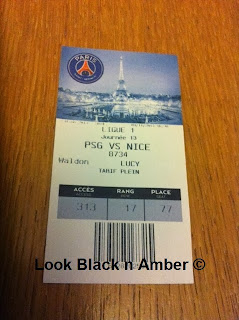