It seems a while since my blog has contained the perspective from opposing fans, what with there being no Aldershot Town fans anywhere (shame on you!). Tuesday night, Southend United were the visitors to Underhill – there seems to be a pattern here emerging, as I write as we missed out on any points once again. Thanks to Southend fan, Scott, @S_Wallace23 for his input. 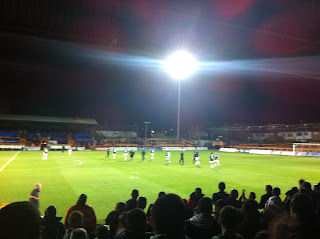 25/10/11
Barnet 0 – 3 Southend United
(Hall ’17, Mohsni ’36, Harris ’85)
Attendance 2,744 (away 1,216)
How did you get to the game?
I got the coach from Rayleigh Weir at 5 o’clock. It took us about an hour and a half to get to the ground
What did you do pre-match?
I went to the Old Red Lion pub, but it took me a good 20 minutes to get served by one of the staff – there were four working!
Where did you sit/stand in the ground?
Stood on the East Terrace. I was at the back in the corner nearest the home fans, so had some good banter with them.
What did you make of the game?
I couldn’t see a great deal with the people in front of me but from what I did see I thought we played some really good stuff. The manager is rotating the squad which can sometimes be risky – but we seem to be pulling it off and winning games.
Was the scoreline a fair reflection?
I think so, but if the penalty had gone in early on, it could have been a totally different story. One of my mates had a bet on Ryan Hall being first scorer and Southend to win 3-0 so I think the beers are on him on Saturday!
Who, in your opinion was man of the match?
Michael Timlin, who we have on loan from Swindon – not sure how he can’t get into their side. He is a real class act and too good for League 2. Hopefully they can be tempted to let him go permanently in the January window. It’s no coincidence that our unbeaten run has coincided with his run in the side.
Who have you got next and how do you think you'll get on?
We’re away at Macclesfield at the weekend. A coach load of us will be going up there in fancy dress as it is Halloween. Macclesfield are doing well this season but I’m very confident that we’re going to get something from every game at the moment. I’ll say a 2-0 away win.
Thanks Scott
My final word
As much as we can blame the officials for some of the decisions made (particularly the fiasco surrounding Southend’s second goal – it was definitely, as the linesman initially said, offside!), we only have ourselves to blame. If McLeod scored the penalty, I’m not confident we would have won the game, but at least it could have given us that bit of confidence or even momentum. Again, not much to say positively about our performance – other than that of Ricky Holmes, who’s been doing really well of late! It seems that once again, defending is our downfall and something that really needs work on!
Posted by Lucy at 8:55 pm No comments: 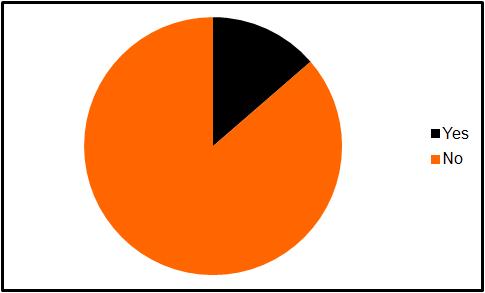 I don’t think it’s any real surprise the general consensus is a resounding ‘no’. What with several incidents highlighted above and all those we don’t yet know about, it is obvious that footballers aren’t the well-respected figures they once were.
Posted by Lucy at 12:01 pm No comments:

Cup competitions: should they really be a priority?

Our unsurprisingly bad start to the campaign continued last week with two league defeats (at home to Northampton, 2–1 and away to Shrewsbury 3–2) on either Saturday with a victory on the Tuesday night – 3–1 in the Johnstone’s Paint Trophy at the hands of Gillingham, at Priestfields.
This was our second win in the competition, following a further 3–1 victory in the first round against Colchester United at the Weston Homes Community Stadium. The draw which took place on Saturday morning before the game at the Greenhous Meadow saw us pitted against Cheltenham, which will be in the Southern area quarter final (for those who are remotely interested, games will be played on the 8th/9th November) – a mere three games away from a trip to Wembley for the final. It’ll also be our fifth away tie (out of five games) in all Cup competitions this season so far!
I think it’s fair to say we seem to be performing a lot better in the cup competitions this season, in comparison with recent years; however, for me, this is massively frustrating, as despite decent runs, we are clearly underachieving in the League. The table doesn’t lie and I would much rather be getting the points on board (now, and throughout the season), than be having these cup runs. Even more so when you take into account one is nicknamed the “paint pot”, and the other, the “Mickey Mouse” trophy – both inferior in terms of prize money and overall club revenue, and the former inferior in terms of the quality and stature of the teams that participate.
Talking of the League Cup, a further example of where we fared well (up until the second round, that is). Round one saw us paired up with a massively difficult away tie at Fratton Park and Portsmouth – where we triumphed to a victory, albeit a 1–0. The second round wasn’t much kinder to us, again another trip on the road, this time at Burnley. Despite unfortunately losing in extra time (with the scores levelled at 2–2 after 90 minutes), we gave a very good account of ourselves – it’s just a shame we cannot put those kind of performances in on the average League game, where ultimately it matters.
With the FA Cup still in its preliminary qualifying stages and us not scheduled to play until the first round proper (November 12th is the date for that), the following month is surely high time to get some wins together and more importantly, gain some points. We haven’t got the concern of any Cup competitions up until the second week of November – but it looks set to be a busy month with the League and two Cups to worry about.
Now, let’s be honest, if you’re a supporter of a League 2 club like myself, you’re only ever interested in a cup run if it culminates in your team getting a glamour tie at the stomping grounds of the likes of Manchester United, Chelsea, Arsenal, Liverpool, Tottenham etc. This is where the League Cup was harsh on us (with no disrespect to Burnley, of course) – in our case, it’s all about getting a tie we as fans, and the players could only ever dream of.
After looking at the prize fund in the said, JPT, I can’t help but feel slightly disappointed and that surely our priorities should be focused elsewhere, i.e. the League. Obviously this is scraping the bottom of the barrel for the worst case scenario, but imagine if we (or any other club, for that matter) got that trip to Wembley and won the £40,000 jackpot at the end, but then got relegated. Think of all the money lost as a consequence. Like I said, worst case scenario, and it doesn’t really bear thinking about.
For beating Colchester in the first round of the cup, we received a measly £5,000 – probably covering the wages of Izale McLeod and Mark Marshall for a week! The victory against Gillingham last week saw us pocket £7,000, again not much better! A win in round three against Cheltenham will see a prize of £10,000; area semi final winners receive £17,000 and area finalists, a more modest £25.5k. I was unable to find the prize pot for each round of the Carling Cup, but I can’t see a knock-out after round two really generating that much cash. The FA Cup has yet to release its prize money for this season, but again, that will also depend on how far we progress.
In the long run, is it really worth it?
Fan Poll:
To see if it was just me who felt this way, I decided upon putting a poll on the blog for a couple of days. The question posed was: ‘As a fan, which do you feel is more important?’ – with the answers ‘League’ and ‘Cup progression’. The results are as follows. 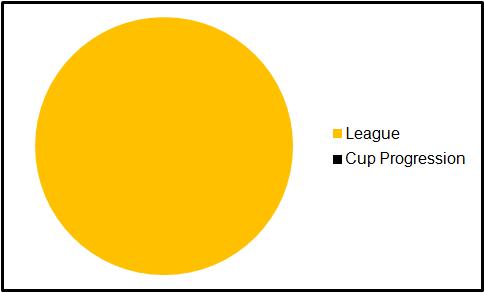 Barnet supporter: it's a tough life

‘Two minutes with…’ this week comes from the point of view of Northampton fan, Daniel (aka @BSCobbler). Again, I find myself compiling this on the end of another defeat! 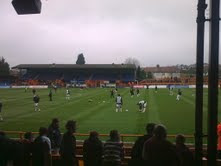 01/10/11
Barnet 1 – 2 Northampton Town
(Holmes ’17 – Davies ’51, Tozer ’89)
Attendance 2304 (away 631)
How did you get to the game?
I got to the game by car as I only live in Kettering which is around 80 miles away.
What did you do pre-match?
I walked through the nearby chat, before chatting to some Northampton fans at the turnstiles, prior to kick-off.
Where did you sit/stand in the ground?
I sat in the North Family stand - near the back.
What did you make of the game?
It was a tale of two halves really – both sides were quite poor on the day and a bit inconsistent. Northampton couldn't string any passes together in the first half which gave away the first goal really – it was a bad clearance from the Northampton defender. Barnet definitely had the first half. The only way that Northampton looked like scoring was through a set play or a goalkeeping error. Even Northampton's fans booed off the team at half time and this doesn't normally happen at an away game. In the second half, Northampton's midfield was getting into the game more and in turn was how both Northampton's goals came about. The ref did okay but blew up for some fouls which looked like dives.
Was the scoreline a fair reflection?
In the first half Barnet were way on top and Northampton were hardly in the game at all. I thought Barnet should have got a point from the game as they tore though Northampton's defence. Northampton had more chances in the second half but Barnet also had their fair share of chances as well with a few one on ones which weren’t put away. Although a draw would have been a fair result, obviously I’m very happy with all 3 points.
Who, in your opinion was man of the match?
In the first half Mark Marshall, Barnet's winger was undoubtedly causing problems for Northampton's defenders and they couldn't deal with him – in fact they let all the Barnet's players have too much space on the pitch. But man of the match I think goes to Northampton's Marlon Jackson who completely changed the game and playing two up front proved more effective than one.
Who have you got next and how do you think you'll get on?
We have Crawley at Sixfields, which is going to be televised on Sky Sports. I don’t think we’ll beat them as we never do well when the Sky cameras are filming. I’d take a draw in that game.
Thanks Daniel
My final word:
I normally like to keep my final word short and sweet. Unfortunately there are too many pointers from this game that have got people talking so check out my next entry and find out why times are frustrating for our fans, particularly given the weekend’s result.
Posted by Lucy at 12:39 pm No comments: