As you may or may not know, there is a feature about Barnet in this month’s FourFourTwo magazine. A couple of the guys were at the Aldershot game on New Year’s Day, with one of the writers (Nick) and a photographer. Following my previous piece I wrote for them on last season’s relegation scrap (which you can find here), I was asked to give my input again on all things Davids and how the campaign thus far was going.
I didn’t realise at the time, that there would be such a lengthy feature about us and obviously a lot of my content got cut out. I thought I’d blog my responses to the questions I was asked as well as attaching a copy from the magazine. I’ve copied and pasted it so it will be in Q&A format (although I was always taught at Uni to steer clear of that). 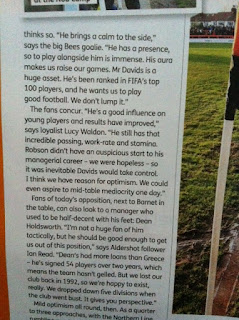