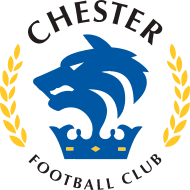 21st – relegated, but reprieved due to Hereford’s demise
I'm glad it went quickly, as it was one of the worst seasons I've had following Chester!
Players out:
I hate to criticise my own team, but it's safe to say that I won't miss any one of those who pulled on the Chester shirt and have not been retained. It really was a dire effort by those involved; the likes of Seddon, Jarrett, Heath, Lindfield (arguably the worst player I've ever seen), Reed and McIntyre were a tepid bunch. Only Lewis Turner, who we had on loan from Leeds and recently joined Harrogate, can hold his head high
Players in:
Steve Burr knows this league inside out, and that is of a huge benefit to us, compared to last season, where our previous manager had no clue of Conference football (and it showed) – Burr knows what he has to get in to improve on last season’s dismal showing
We've got in a seasoned pro in Chris Iwelumo: ex Scotland international, and while he's "past it", he brings valuable experience to the front line and this has been noticeable in pre season friendlies so far
In midfield, the one who's stood out for me is Kingsley James. We lacked someone last season who, whilst doing the dirty work in the middle, could also bring other players into the game with his wide range of accurate passing. He's really impressed me in pre season
We also welcomed Peter Winn from Macclesfield, and he comes with a good reputation as well, having played well against us in both games versus Macc last season
Wayne Riley is a pacey, skilful winger signed from Hednesford and we welcome an old nemesis in John Disney, again from Hednesford, but again, he's a player who will give 100% when it matters
At the back, it's pretty much as you were as last season, with Gareth Roberts arriving from Notts County, bringing experience at the back. He does like to try forward and while that's one advantage attacking, it could lead us to being prone in defence as teams counter us
To sum it up, every player will be key for us next season, we need them all to stand up and be counted. We don't want a repeat of last season!
Club news:
The Club decided to go full-time in the summer. Being part time in a league like the Conference is a huge disadvantage. Luckily, we've got the budget (albeit a tight one) to go full-time and this should improve us greatly, especially later on in games. Late goals conceded was almost fatal for us last season and the amount of points lost from winning positions in the final 10 minutes of games was sickening
Matches to look forward to:
We have been given a second chance and instead of visiting the likes of Guiseley, Boston, Barrow and Stockport, it's big games against the likes of Wrexham, Bristol Rovers, Torquay, Kidderminster, Altrincham and Barnet that whet the appetite. Apart from Wrexham, I'm really looking forward to Telford – my favourite away day. A local game, a fantastic stadium and two sets of fans proclaiming who dislikes Shrewsbury more makes it all an entertaining affair
Predictions:
Chester to finish 12th
I said 14th last season, that went well! I don't think we will struggle, I doubt we would trouble the play-off contenders either
Champions – Bristol Rovers
Play-off winners - Eastleigh
Relegated – Alfreton, Altrincham, Dover, Dartford

Thanks to James Hewitt @cestrian_jim for helping out with this post
Posted by Lucy at 11:10 pm