My trip to Estadio Santiago Bernabéu (part one)

I recently went on a four-day break to Madrid and while there, had to go and visit the Bernabéu. I’d been a couple of times before (including on match day), but my boyfriend hadn’t and was desperate to go! No matter how many times I visit, the sheer magnitude of the stadium always overwhelms me. I think this is largely due to the fact it’s far superior to the grounds I usually visit during the season. 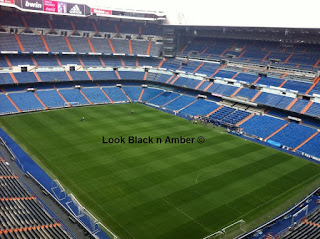 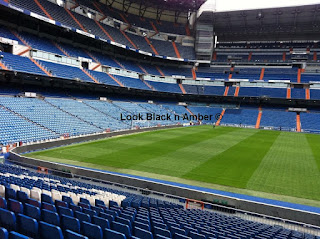 On arrival, we had to collect our tickets and luckily you can buy these on the day and there’s no need to book. The tour begins in tower B, which is the direction you originally come from once at the Santiago Bernabéu metro stop. After ascending a number of escalators, you find yourself in the top tier where you’re presented with a fabulous panoramic view of the while stadium. Because it isn’t a guided tour, you can spend as much time as you like taking photos and standing in awe and admiration. I’d imagine it would feel a lot higher up when full, if you were sitting at the back for a game – to me, it didn’t feel too far from pitch level, but I guess that’s because it was so empty. From here, you go down the stairs, a level at a time, with plenty of view points on the way, before reaching the pitch. 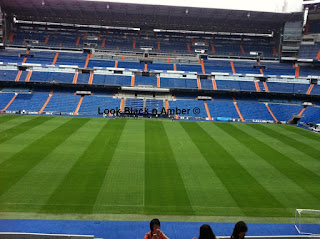 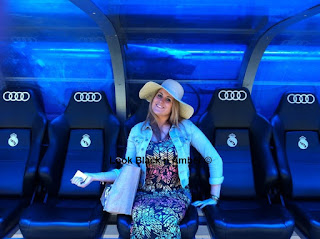 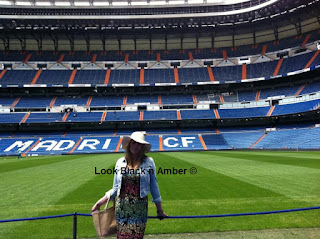 I found being on ground a lot more exciting and you’re within touching distance of the hallowed turf (although it’s obviously cordoned off to prevent it getting spoilt). Walking around the edge, there are plenty more photo opportunities, including pitch side, as well as the coaching area and players’ bench – again a far cry from anything I’d ever seen before! The seats in the dugout were even more comfortable than the ones I sat in when I visited Old Trafford! After soaking up some of the beauty up close, it’s time to walk down the tunnel, which weirdly is separated into two different walkways, divided by railings. 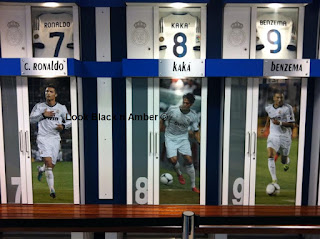 With it being so quiet and empty, with no buzz surrounding a game, I found the interior quite eerie – there was a weird hospital smell, which soon turned to one of strong bleach. Everything was so dark as well. The last time I visited, the home dressing room was close for refurbishment, so it was good to finally look around – even if you couldn’t sit on the benches. Pictures of the current squad and their numbered shirts hung from the walls and it was quite amazing to think we were sharing a room utilised by so many legends and world class players! It was also funny seeing where everyone’s positions were, including the fourth-choice goal keeper who sat on his own! The away dressing room was similar, but you were allowed to take a seat. There was also a couple of hot tubs, the toilets and showers (which weirdly, someone took a photo of) and a massage room. The latter was rather disappointing compared to everything else we had already seen – it was a small cramped room with four massage tables and a couple of cabinets filled with various medical products. It almost seemed out of place and like I say, was underwhelming. 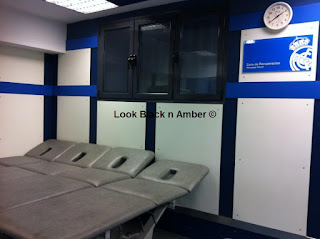 The press room was the final place of note and was clearly one of the more popular areas – there was a queue outside the entrance and groups of people standing around, waiting to have their photos taken. After taking a seat in the press area while the queues died down, I took my place in the manager’s seat in the middle of the podium. Of course it was a little strange, not having an audience, but you were left imagining what it’d be like post match, in full flow. 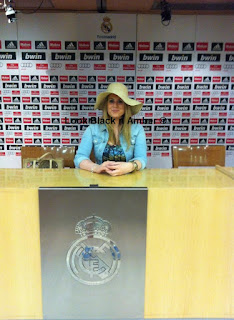 There were also a couple of professional photo opportunities on the way round and you could have your photo taken holding a trophy, as well as with your favourite player (we both chose Kaka). You were given a ticket and were allowed to view and purchase the photos in the club shop – unfortunately, I couldn’t justify spending €12 or €17 on them, but it was a bit of fun regardless!


Look out for part two with photos and a write-up from the museum.
Posted by Lucy at 6:21 pm