My away day experience: Northampton Town

It has been a while since I’ve gone to an away game, as gone are the days of being a student and spending the majority of my loan on travelling the length and breadth of the country following the Bees. In fact, the last away game I went to was back last March: a 0-0 draw against Rotherham at the Don Valley. I thought I may as well start a new feature whereby I mark out my day away from home; it probably won’t make that much of an interest read, but never mind…


As you know, following my last entry – match report: Northampton Town v Barnet – my first away day experience is my trip to Sixfields.
8:30am – I woke up way before my alarm, which had been set for 9:45am, and was feeling undeniably tired and rough. I had been out the night before for a mate’s 22nd birthday, and whilst it was only in Brentwood (pre-drinking at Slug + Lettuce before going to Sugarhut) and I left at  around 1am, I’d only had about five and a bit hours’ sleep. Maybe it was the excitement about the prospect of the day ahead?
10:40am – my mum dropped me off at Shenfield station, where I collected my pre-ordered tickets and bought some brunch – I knew I wouldn’t be eating on arrival in Northampton, and it made sense not to fork out a load of money on food in London – so I just grabbed a sandwich and a kitkat.
11:05am – my train for Liverpool Street departed and luckily it was the quick one, only stopping at Stratford and said destination (as opposed to the one that stops at every station from Essex to East/Central London). Despite it being packed out – I had to stand all journey – I can only assume most people were hitting Westfield and the other shops, it only took about 25 minutes; pretty standard.
11:30am – after arriving at Liverpool Street, I then had to have the mammoth task of taking the tube to Euston, which is where I’d be getting the train to Northampton.  As is the case, the majority of the time (how the hell are they going to survive when it’s the Olympics!?), a lot of the tube lines were either suffering severe delays, or simply not running. Normally I’d get the Metropolitan line to Moorgate, before getting the Northern line to Euston; instead I had to get the Central line to Bank, before hitting the Northern line. This ate into my journey somewhat, and it wasn’t made very clear what was going on, so there were a lot of people standing around, looking as confused as myself. I also fail to mention, I suffer from claustrophobia, and hate travelling on the underground, on my own!

11:55am – I arrived at Euston in good time, my train wasn’t leaving until just before ten-past. The train was already on the platform (10) and there were signals to say it was already boarding. There was a little bit more confusion, as only a couple of doors were working, and people were still standing around asking “is this the train to Birmingham New Street?” and “were we allowed to board yet?” – I jumped on regardless, managing to grab a table, and having a spare chair for my bag.
12:06pm – the train finally left the station, and I met a friend (who was with a couple of other people) on the carriage; meaning my bag no longer had a seat, and I had to lug it all the way there on my lap. A couple of drinks were flying about, much to a few disapproving looks from the other people in the carriage. The time flew, although it’s a quick journey to Northampton – an hour in total, with only five stops. 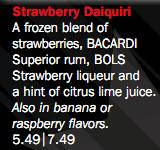 1:06pm – arriving at Northampton station, we got a taxi to our usual drinking spot – TGI Friday on the Sixfields complex. The taxi was little over £6, which worked out to a couple of quid each. With just under a couple of hours until kick-off, it was fairly quiet at TGIs , with only a handful of fans either at the bar, drinking, or sitting at tables with food – I’d certainly seen it a lot busier in previous years. I caught up with a couple of friends, before deciding we’d all take it in turns to buy rounds (as well as shots). As is normally the case when visiting Northampton, I was on cocktails only, picking out a different one from the menu every time.
2:45pm – by this time most people had already left for the ground (which is situated just across the road), whilst myself and a couple of other people continued to drink. This time, I was with the guys that sit behind me at Barnet. We did finally leave dead on kick-off. 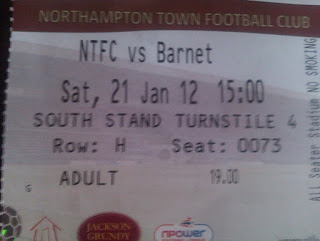 3:05pm – we got to the ground, and only one turnstile was open and we were unable to get our tickets from the usual portakabin, where away fans go. Instead we had to walk all the way back round to the main entrance, and get our tickets from the home fan ticket office/club shop area. I was unable to get my student/concession ticket costing £15 from here, so had to fork out an extra £4 for an adult ticket – after the amount of drinks previously thrown back, I couldn’t really be bothered to try and a blag an under-18s ticket. Walking back round to the turnstile we heard the home side were already a goal up. 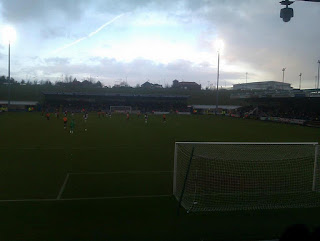 3:15pm – we took our places in the back row for the game. My only gripe about Northampton would have to be the amount of fuss their stewards make, regarding standing. They constantly eye you like a hawk and make you sit down. They even do it to the extent of guiding you to your own individual seat, which rules out any chance of continuing to watch with friends and sharing two to a chair. As is normally the case, they reach the point of not caring and go back to being jobsworths elsewhere. Why anyone should obey their strict regime anyway is beyond me…
5:05pm – to be honest, everything between leaving Sixfields and getting the train back from Northampton station is a complete blur. I think being in the open air had finally reacted with me. I can only assume we got a taxi to the station, before boarding the train home. I couldn’t tell you who I was travelling with, or how it was paid for… I was fine, however, when I was on the train, and met with a couple of friends for the journey home. On arrival at Euston we went to the pub for a couple of post-match celebratory bevvies. Said friends has frequented this drinking spot on the journey up. Everyone then went their separate ways – myself, Essex bound, and others, various areas of London.
8:40pm – After getting the tube across London to Liverpool Street, I got the train home to Shenfield. My mum collected me at the other end and I came home to be greeted with a KFC – which, as you can imagine, after no proper meal all day, went down nicely!
And if you haven’t seen it already, I recently wrote my pre-match thoughts on ‘Claret and white, no matter how shite’ and you can read my piece here.
Posted by Lucy at 6:01 pm